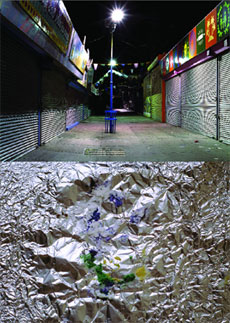 Two exhibitions in the main gallery:

And in the project space:

Revitalizing the former home of one of Washington's top galleries, Civilian Art Projects proudly launches in its new location and gallery space a two-person exhibition of new photographic work by Jason Falchook (NY) and Jason Zimmerman (DC), and a group show in the project space called "Behind the Wall" including work by nine emerging artists from across the United States. An essay by Andy Grundberg, educator, curator and writer, will accompany this exhibition. A reception for the artists will be held Friday, March 9, 2007 from 6:30 - 8:30 p.m. Public exhibition hours are Wednesday through Saturday 12:00 p.m. to 6:00 p.m. and by appointment.

Prior to this exhibition, Civilian operated as a roving gallery without a physical home base. Operating virtually and with spaces throughout Washington, DC, Civilian had the pleasure and opportunity to grow its program and audience while learning from and working side by side with leaders in the art community. Civilian is thrilled to announce the acquisition of a permanent home base at 406 7th Street NW, Third Floor, in the bustling Chinatown/Penn Quarter neighborhood of downtown Washington, DC. Civilian's new home is a few blocks from the Hirshhorn Museum & Sculpture Garden, the National Gallery of Art, and the newly renovated Reynolds Center featuring the Smithsonian Museum of American Art and National Portrait Gallery.

In concurrent exhibitions Contours & Detours and Natural Acts, Jason Falchook and Jason Zimmerman present decisive, unique bodies of work that examine the world around us. Questioning our connection to the spaces we develop and inhabit, Jason Falchook's large-scale, color-saturated photographs depict a landscape in continual transition. Capturing a world between the debris of the industrial past and the promise of a more austere, technological future, Falchook's images convey "the areas where edges meet, observing what we have access to and what we are excluded from." Mediating through shape, form and detail; isolated yet beautiful images of parking lots lush with foliage, a street corner satellite dish hanging with a network of wires and utility poles, and high rise communities caught in the glow of lighting from an on ramp draw attention to an underlying plan of living and security. In "Contours & Detours," Falchook examines how we are guided through these spaces by planned design, architecture and lighting, capturing in captivating detail how these spaces shift as we condition and adapt our surroundings to suit our changing notions of fear, anxiety, and desire.

Falchook's photography is in the permanent collection of the U.S. State Department, the National Academy of Sciences, and several private collections. He has had solo exhibitions at Fusebox Gallery in Washington, DC (2002 and 2004) as well as group exhibitions at the Katonah Museum of Art (Katonah, NY); Shade Projects and Monorchid Gallery (Phoenix, AZ); The National Academy of Science (Washington, DC); Corcoran Gallery of Art (Washington, DC); Art Positions, Art Basel Miami Beach (through Fusebox) (Miami, FL); U.S. Embassy Brasilia (Brasilia, Brazil); Instituto De Arte Fotographico (Lima, Peru); and the Fort Lauderdale Museum of Art (FL). Falchook is a graduate of the Corcoran College of Art and Design (1998), a Trawick Prize finalist (2003) and a recipient of the DC Commission on the Arts and Humanities Young Artist grant (2001).

Like Falchook's, Jason Zimmerman's new body of work is a formal study of objects as well as an exploration of environment. Part vignette, part slide-show narrative, "Natural Acts" captures intimate scenes of objects and subjects as the artist found them in their natural state. Images include a table setting with a chipped antique plate and large beetle; a purple jellyfish undulating next to grey rocks and green seaweed; expressive blue and green icing on shiny aluminum foil; and puffy, tattered stickers on a white refrigerator door. These seemingly objective photographs quietly team with meaning, sharing a commonality of markers from the world around us told from an uncommon perspective.

Zimmerman has had solo exhibitions at Transformer and Irvine Contemporary Art in Washington, DC and has been in exhibitions at the UCLA Hammer Museum in Los Angeles, CA; The Creative Alliance in Baltimore; Pyramid Atlantic (MD); and the Scope Art Fairs in Miami and New York (through Curator's Office); among others. He received the 2006 Young Artist Trawick Prize and he was a 2006 finalist for the Janet & Walter Sondheim Prize. He graduated from the Corcoran College of Art and Design in 2003, where he received the 2003 Alumni Award for Excellence.